THE BARE BONES MC - Book One 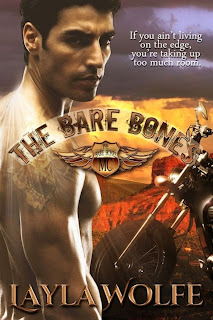 If you ain’t living on the edge, you’re taking up too much room.

Madison and Ford have an ill-fated, star-crossed love that will last their lifetimes.  Ford is a lifer in a different sort of enterprise, the gritty full-throttle club of guns, blood, and allegiance to his brothers.

Twelve years and several tours of SEAL duty later, Ford is thrust back into Madison’s arms on the worst day of his life.  Madison’s prospect brother Speed has screwed up big-time and owes the club his life.  She offers herself to Cropper as a sacrificial lamb to save Speed.

But how long until the fiery, full-on outlaw Ford discovers that the woman he loves was treated like a degraded slave by his own father?  Well, meet the new boss.  He’s not the same as the old boss. 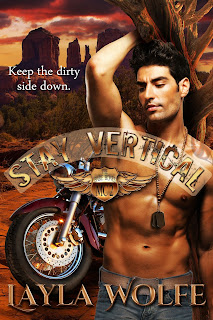 Peace Corps volunteer June Shellmound returns to Arizona to care for her dying mother.  At the clubhouse of The Bare Bones motorcycle club, June is swept into the drama when half-breed Lytton Driving Hawk barges in and demands recognition as president Ford Illuminati’s half-brother.

Hot enough to melt steel, Lytton has forged a life apart from the reservation as a brilliant chemist, living the high times at his pot farm in the mountains.  Lytton is no fortunate son, though, and the mortal secrets Ford’s been hiding about their father drive the last nail into their brotherly coffin.

Lytton turns his back on The Bare Bones and sweet bleeding heart June.  Blinded by vengeance, Lytton becomes ruled by his own demons, raising hell alongside Ford’s mortal enemies, The Cutlasses.  Alliances are torn apart within the club, loyalties are divided, and everyone’s true spirits are tested.  When the dust clears, Lytton and June find themselves running for their lives just to… 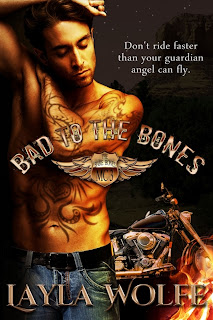 BAD TO THE BONES - Book Three

Don't ride faster than your guardian angel can fly.

Knoxie Hammett has been The Bare Bones' tattoo artist for years.  He's just drifted through life, living it large and performing in their Triple Exposure films, recovering from a divorce he never wanted.  Suddenly Knoxie has a reason to live and to want to prospect for The Bare Bones outlaw motorcycle club.

He'll need their help to rescue the lovely Bellamy Jager from the jaws of the cutthroat, warped cult leader who has been holding her hostage all her adult life.  To the neglected, abused Bellamy, living in the desert canyons off stolen food and time, the sanctity of the ashram looked like a safe zone.  But her haven turned to hell and she was drugged and abused, ignorant of any other way of life.

Knoxie will need every one of his Bare Bones brothers and every ounce of bravery he can muster.   To save Bellamy and her white slave sister from the twisted swami, he’ll need to pull off the most daring job of his life to prove to the club and the world that he’s…BAD TO THE BONES
Amazon  |  Amazon UK 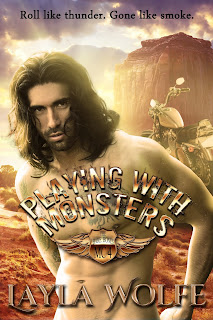 Roman Serpico has abandoned a thriving rock star career to prospect for The Bare Bones MC.  His goal: revenge on the cartel for his father’s murder.  His black soul is a writhing mass of venom and rage, and joining the club fuels his ability to wreak havoc.  His stepfather, the club’s lawyer slushy, calls on his to save a stepsister Roman barely knows.  Nurse’s assistant Gudrun McGill has fallen in with a bad crowd and needs an emergency extrication…now.

Roman believes he’s killed Gudrun’s assailant, but the loathsome, murderous fugitive Riker has nine lives.  He lives to traffic in human flesh another day, and Roman is hell-bent on tracking the bastard down.  But The Bare Bones votes to place Gudrun into custody with her stepbrother as her bodyguard.  Things heat up between them when they hide in plain sight in the ghost town that surrounds The Citadel, their clubhouse.

Roman has vowed celibacy to fixate on vengeance.  Gudrun wants nothing to do with men after losing her husband in a horrific car crash.

The terror of their situation brings them too close for comfort.  Walls must come down.  Barriers must be broken.  Taking risks is in the nature of their new MC family.  Roman has to roll the dice, to hit fast against Riker and the Chinese cartel.  To preserve his newfound family, he has to roll like thunder and be gone like smoke.
Amazon  |  Amazon UK 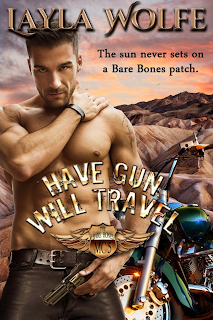 HAVE GUN, WILL TRAVEL - Book Five

The sun never sets on a Bare Bones patch.

Beatrix Hellman has reunited with her Bare Bones sweetbutt friends from high school.  Her isolated life in a mountaintop convent has ground to a sudden halt, her faith dashed against the rocks.   She needs something else to believe in, and her old friends become her new family.  But a sadistic cartel associate of the club has maimed one of the whores.  Bee and the women put a bounty on Tony Tormenta’s head.  And they think they know just the man for the job.

Will Sax’s bold heroics renew Bee’s faith in the world?  She finds control and strength in submitting to the virile bad boy biker.  With each power exchange, she is brought closer to a fresh hope and conviction, but tracking down the brutal Tormenta also brings fresh danger as they close in on his mountaintop hideout.
Amazon  |  Amazon UK 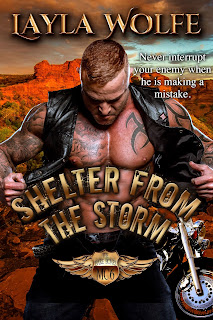 SHELTER FROM THE STORM - Book Six

A hitman on the run from his past.
A chemist with no past.
Their faith will be tested in incredible ways.

Alpha bad boy Fox Isherwood has crafted a new life for himself as a cartel hitman.  To prove his loyalty, he is sent on the most impossible mission of all—to murder an innocent woman.

Pippa Lofting isn’t her real name.  As a federally protected witness, she is a non-person, unable to contact any of her loved ones.  She can’t send a text or even visit her dog.
She’s created a new existence in Pure and Easy, Arizona, home of The Bare Bones MC.  Caught up in the whirlwind thrill of their gritty, fast-paced life, Pippa believes she might be ready to love again when buff, inked ginger Fox appears in town.  He is stunning, a macho man for all seasons, and he brings out the best in her—as far as she remembers.

But passion is the last thing on Fox’s mind.  The Bare Bones has ordered him to investigate a rival pot plantation, find out why they’re sending spies.    When a hitman starts tracking Fox, the heat is on.  Will Fox become the hunter or the hunted?  And Pippa’s going to need everything he’s willing to give, because she needs…

IT TAKES A THIEF - Book Seven 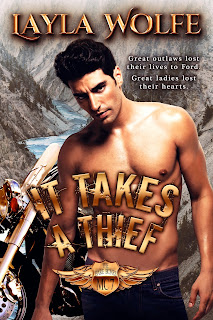 Ford Illuminati, Prez of the famed Bare Bones MC, is in the crosshairs of Noodlum, a whacked thug recently joined with the Cutlasses.  When Ford’s company steals some highway workers of theirs, Noodlum lashes out with subterfuge, placing fake news stories about the club and stealing their identities to charge Cialis and penis weights.

But the clincher is when Noodlum targets Ford’s old lady, Madison.  His twisted obsession with Madison puts Ford on the alert, and Santiago Slayer on his trail.  But things haven’t been going well between Ford and Maddy lately.  His two jobs—Prez of the MC and his construction company—have got him working more than double time.  Neglected and feeling unloved, Maddy has a meltdown when a patient of hers dies.  She needs to do something different—something fulfilling.

When she works at a clinic on the Indian Rez, a heartthrob doctor catches her eye.  But he’s not the real menace.  Noodlum has come unhinged, targeting the light of Ford’s life—Madison Illuminati.  Ford is forced to play along with the whacko’s games, step by step.  It will take the combined forces of his club and his company to emerge triumphant . . . to save his one true love and reclaim their marriage.
Amazon  |  Amazon UK 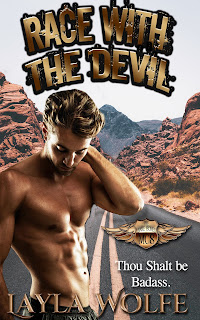 Thou Shalt Be Badass.

Tanner Principato is a gruff, surly combat vet who has cobbled together a livelihood flying rescue dogs to forever homes.  When Tanner makes good on a promise to Bare Bones MC lawyer Slushy and brings a puppy to a lonely member, he is caught in the middle of a mystery.  Tanner’s innate kindness means he volunteers to track down the missing bride of the club’s fentanyl dealer, Tutti Morgan, the “Walter White of Flagstaff.”  Bare Bones territory looks even more inviting to Tanner when he’s paired up with a friend of the vanished newlywed, Unity Mitford.

A rape victim, Unity’s job as spokesmodel for cannabis companies brings her into the limelight with many men.  Men she teases.  Men she avoids.  Terrified of intimacy, Unity has developed a wide array of survival skills to keep men at bay.  When she starts working with Tanner, for the first time she questions some of these methods of isolation.  Does she really want to resist the dashing, commanding, and carved pilot?  He calls her the Queen of Heaven after a Kama Sutra position, and he leaves his mark on her heart.

Their fling—and detective partnership—comes to a grinding halt when Unity finds out what Tanner spent ten years in prison for.  She can’t throw her missing friend under the bus, but she will never—never!—waste another minute in the presence of such a vile asshole as Tanner Principato.

Like the injured and abused animals he’s worked with, Tanner knows to proceed slowly with Unity.  If terrified by sudden movement, animals can keel over, dead.  And Tanner knows that . . .


if you’re going to race with the devil, you got to be fast as hell.
Amazon  |  Amazon UK


The party’s not over ‘til you smile for the mugshot. 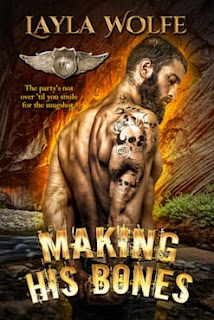 Gray Whaley has returned to Pure and Easy, the scene of childhood horror, and the safety of his old friends, The Bare Bones MC.  He’s fed up with the trivial, superficial LA scene where he emceed a reality show and modeled for perverts.  He wants to get back to basics.
When a Bare Boner is arrested by the FBI for an old murder, Gray falls in with Elektra Spinoza, the hot, dark forensic geneticist who made it all happen with her infallible DNA science.  Gray is smitten, and determines to help Elektra track down the killer of her daughter a decade ago.

With the assistance of half-breed shepherd Galileo Taliwood, Mexican drug mule Tiago, and a team of hotshot “hacktivists” headed by Tobiah Weingarten, Gray and Elektra plunge toward their destiny with the unknown.  A church pastor is using kids as drug runners, then sending them out into the desert with moonshine to die.  Every step closer to the sick child killer dredges up youthful nightmares for Gray, but he’s determined to power through it for the love of the sexy scientist and vengeance for abused children.

As for Elektra, well, she’s just not going to rest until the culprit smiles for the mugshot.
Amazon   |   Amazon UK 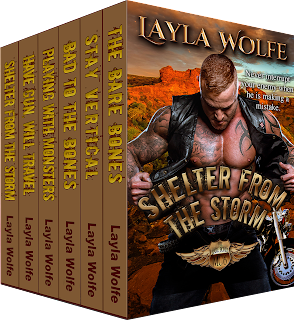 The Bare Bones #1
Stay Vertical #2
Bad to the Bones #3
Playing with Monsters #4
Have Gun, Will Travel #5
Shelter From The Storm #6
It Takes a Thief #7