I'm proud to present the new cover for the BARE BONES MC I'm working on currently, Making His Bones. 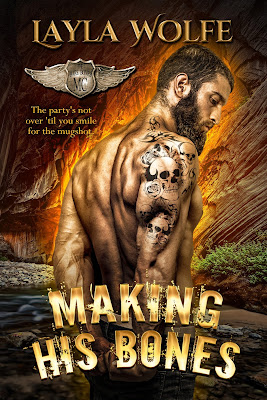 The party’s not over ‘til you smile for the mugshot.

Gray Whaley has returned to Pure and Easy, the scene of childhood horror, and the safety of his old friends, The Bare Bones MC.  He’s fed up with the trivial, superficial LA scene where he emceed a reality show and modeled for perverts.  He wants to get back to basics.

When a Bare Boner is arrested by the FBI for an old murder, Gray falls in with Elektra Spinoza, the hot, dark forensic geneticist who made it all happen with her infallible DNA science.  Gray is smitten, and determines to help Elektra track down the killer of her daughter a decade ago..

With the assistance of half-breed sheepherder Galileo Taliwood, Mexican drug mule Tiago, and a team of hotshot “hacktivists” headed by Tobiah Weingarten, Gray and Elektra plunge toward their destiny with the unknown.  A church pastor is using kids as drug runners, then sending them out into the desert with moonshine to die.  Every step closer to the sick child killer dredges up youthful nightmares for Gray, but he’s determined to power through it for the love of the sexy scientist and vengeance for abused children.

As for Elektra, well, she’s just not going to rest until the culprit smiles for the mugshot.